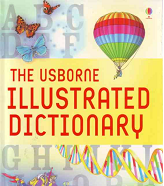 The Dictionary project was established by the Rotary Club of Osborne Park in 2009-2010 for classes having disadvantaged students in selected schools (many with a high proportion of Aboriginal Students). The Dictionaries explained the meaning of words both in text and visually. More than 200 dictionaries were presented to eight schools in the State. The dictionaries remained the property of schools and were allocated to students for a year of study.

The project was equitable for all people from disadvantaged backgrounds and was well received by families.

The project ceased when the wholesaler, who supplied the books at low cost, could not economically sustain his business.